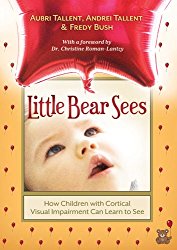 Cortical visual impairment (CVI), the leading cause of visual impairment in children today, is caused by damage to visual centers of the brain. Unfortunately, CVI is very often misdiagnosed or undiagnosed because many doctors, therapists and educators simply do not know about it. What we want you to know, first and foremost, is that there is hope! Children with CVI can learn to see, their vision can get better! As parents of a child with CVI, we know how daunting it can be to raise a child with visual impairment. LITTLE BEAR SEES is the first book about CVI written by parents for parents. As you read LITTLE BEAR SEES, you will meet other families facing the many challenges that come with a diagnosis of CVI. This book was written for parents, but it our sincere hope that it will be shared with doctors, therapists, family, friends and all those whose lives are touched by a child with CVI. Together we can raise awareness and improve the lives of children with cortical visual impairment. In LITTLE BEAR SEES you will learn: • Exactly what CVI is • What common characteristics to look for to determine if your child has CVI • How the eyes and brain work together to facilitate vision • Strategies and ideas for helping your child learn to see from the leading experts in cortical visual impairment

Do you want ot get the Little Bear Sees: How Children with Cortical Visual Impairment Can Learn to See?

We use cookies to give you the best experience on our website.I accept