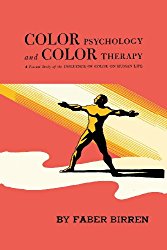 2013 Reprint of 1950 Edition. Full facsimile of the original edition, not reproduced with Optical Recognition Software. American writer Faber Birren devoted his life to color and it's effects on human life. After writing around 25 texts on the topic, it would be safe to say his work is considered highly among color experts and psychologists around the world. Birren's work has a strong focus on linking how humans perceive colors to how it makes them react. He writes, "Good smelling colors are pink, lilac, orchid, cool green, aqua blue." Birren explores the work of several physicians, scientists and doctors, mainly the German psychoanalyst and physician Felix Deutsch, whose findings throw important light not only on medical practice with references to color but on the whole psychology of color. Birren states that if a person prefers warmer colors such as hues of red and oranges, they are likely to me more aware of their social environment. He labels these as "warm color dominant subjects." On the other hand, those preferring cooler colous such as blues and greens, are categorized generally as "cold color dominant subjects" and are recognized as finding it challenging to adapt themselves to new environments and situations". By splitting people into separate categories, based on their color preferences, Birren finds himself able to establish a greater understanding of their personalities and characteristics. One experiment Birren explores in his text, courtesy of Kurt Goldstein, involves a subject standing before a black wall with his eyes shut and arms outstretched to touch the wall in front. When the subject is influenced by a warm color such as the color red, his arms deviate away from each other, whereas when under the influence of a cooler colour such as green or blue, even though the reaction is a subtle one, the subject will move his arms closer together. I find this experiment, simple as it is, to be fascinating in highlighting the strong effects colors have on our minds and bodies. As well as distinguishing the differences in peoples' character through his use of color psychology, Birren also touches on the effects colors can have on the mentally ill. This section was the most interesting and involved a series of complex experiments such as discovering which neurological disorders were linked to which colors. Courtesy of the work by Hans Huber, it was proven that patients suffering manic tendencies preferred the color red, a symbol of blood and anger. Hysterical patients were more sensitive to green, "perhaps as an escape", the color linked to paranoid subjects was found to be brown and schizophrenics are sensitive to yellow. Birren states that persons troubled with "nervous (neurotic) and mental (psychotic) disturbances are greatly affected by color and are responsive to it". Therefore color becomes much more significant to them, and affects them in a completely different way than those without such neurological disturbances. Chapter 12 "Neurotics and Psychotics" is the most compelling in the text as it relates to my dissertation topic. After struggling to find texts specific to my research subject, this text and its contents came as a welcomed discovery and I will be referring to Birren's work throughout my further research.