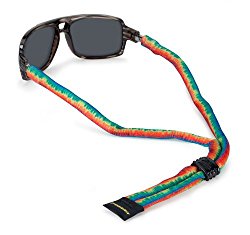 In 1977 a local ski patrolman from Jackson Hole Mountain Resort in Wyoming, came up with an idea for an eyewear retainer that would grip his shades through all kinds of alpine adventures. Using an old wetsuit, some sharp scissors, and good old American ingenuity, he made the first pair of eyewear retainers. The ingenious device was based on the design of a Chinese finger trap and it quickly became a hit with all of the patrollers! Demand picked up quickly for the patrolman’s invention which was nameless at first. Back in the seventies, the Jackson Hole ski patrol used the nickname “croakies” when they couldn’t think of a word (think “thingamajig”), but it finally stuck on the first neoprene eyewear retainer ever invented. Croakies headquarters are still in Jackson Hole, Wyoming with our production in Bozeman, Montana. Our inspiration remains the same - to create eyewear retainers and accessories that provide comfort, style, durability, and functionality to active people of all ages. With the addition of men's and women's belts into Croakies accessory line-up, Croakies now offers something for everyone. Croakies products are sold by retailers throughout the United States and in over 30 countries around the world. They’ve even been used OUT of this world – Croakies became standard issue on the Space Shuttle in 1990.

Do you want ot get the Croakies Suiters Eyewear Retainer, Tie Dye, Anuenue?

We use cookies to give you the best experience on our website.I accept