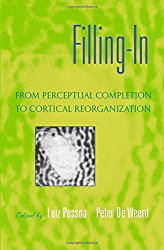 The best example of filling-in involves the blind spot, a region of the retina devoid of photoreceptors. Remarkably, the region of visual space corresponding to the blind spot is not perceived as a dark region in space, but instead as having the same color and texture as the surrounding background; hence the expression "filling in." While this type of perceptual completion phenomenon is common in the visual domain, it is argued by the leading scientists who contribute to this book that forms of filling-in also take place in other sensory modalities, including the auditory, somatosensory, and motor systems. In a concluding chapter an integrative approach is taken, which attempts to provide a common framework for completion phenomena occurring on a fast time scale, and cortical reorganization in sensory and motor cortex induced by peripheral damage or skill learning taking place on a slower time scale. It is proposed that systematic changes in the interplay between inhibitory and excitatory inputs permit cortical neurons to become driven by new sources of input, which, in addition to initial perceptual consequences can lead to a long-term structural reorganization of cortex.This book represents a truly interdisciplinary approach to neuroscience, with chapters covering computational modeling, visual psychophysics, functional brain imaging, single-cell physiology, and clinical patient cases. It will be of interest to researchers and graduate students in systems neuroscience, cognitive neuroscience, vision science, neuroimaging, perceptual psychology, computational neuroscience, and philosophy of mind.