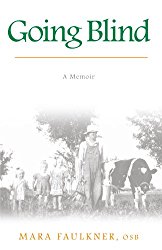 Mara Faulkner grew up in a family shaped by Irish ancestry, a close-to-the-bone existence in rural North Dakota, and the secret of her father's blindness--along with the silence and shame surrounding it. Dennis Faulkner had retinitis pigmentosa, a genetic disease that gradually blinded him and one that may blind many members of his family, including the author. Moving and insightful, Going Blind explores blindness in its many permutations--within the context of the author's family, more broadly, as a disability marked by misconceptions, and as a widely used cultural metaphor. Mara Faulkner delicately weaves her family's story into an analysis of the roots and ramifications of the various metaphorical meanings of blindness, touching on the Catholic Church of the 1940s and 1950s, Japanese internment, the Germans from Russia who dominated her hometown, and the experiences of Native people in North Dakota. Neither sentimental nor dispassionate, the author asks whether it's possible to find gifts when sight is lost.