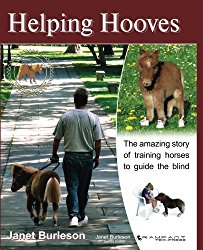 Helping Hooves is a triumph of American creativity and innovation and a compelling story that you don't want to miss. In a world where size and power is respected, it’s the little things that capture your hearts and mind. After a century of neglect, horses are now being re-introduced into our society in a remarkable and creative way. Filled with humor and drama, Janet Burleson shares her remarkable story of training midget ponies to guide the blind. Both entertaining and educational, Janet Burleson tells how she overcame ridicule and prejudice, using her decades of professional horse training to prove that the intelligence of horses could be harnessed for the benefit of mankind. For the first-time ever, after great demand, noted horse whisperer Janet Burleson shares the amazing Guide Horse training story. With many lives depending on her work, learn how and why Janet developed the training program to prepare the horses for the important task of keeping their blind companions safe. Follow the intricate steps required to train tiny ponies to ride escalators and safely guide the blind through crowded urban traffic. Study the detailed photographs illustrating the milestones of the Guide Horse training process. Burleson explains how to overcome the challenges of taking a horse on a flight in the passenger cabin of a commercial airliner including how to reliably housebreak a horse. This is an entertaining and informative book that will leave the reader with a greater understanding of the working bond between horse and human. The remarkable story has captured the hearts and minds of people everywhere and has been featured in TIME, Newsweek, The Wall Street Journal, 20/20 and People Magazine. Reviews: •Janet Burleson is one of the world's pioneering horse trainers – Practical Horseman Magazine •Seeing is believing – USA Today •Janet and Don Burleson are . . . Angels – People Magazine •How wonderful that Janet and Don Burleson have initiated this valuable experimental program teaming miniature horses with blind people – Newsweek •Miniature ponies are leading the way for the blind – ABC News •Guide Horses . . . are as small and disciplined as Guide Dogs – TIME Magazine •Extraordinary – ABC 20/20 •It is often the little things that win our hearts and minds – ABC News •The Burleson’s are . . . using horse sense to Guide – Boston Globe •Twinkie proved that miniature horses could fill the role, and fill it well – VetCentric Magazine •An Intriguing Program - Discovery Channel