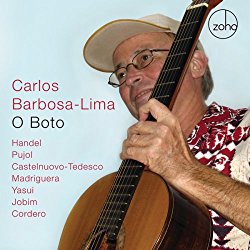 "Guitarist Carlos Barbosa-Lima is a Brazilian national treasure ... Music of this caliber is simply sublime." -- All About Jazz "Barbosa-Lima follows the travels of the Portuguese as they travel from Europe to the Caribbean, Amazon, and Hawaii ... an ambitious project ... but what is most impressive about it is that it actually works." -- All Music Guide "A great artist, a true wizard of the guitar." -- Antonio Carlos Jobim. Originally released on Concord Records in 1997, O Boto has long been the most soughtafter, but hard to fi nd, title in Barbosa-Lima's Concord catalog. Aggressive grassroots marketing effort through Jazz Promo Services, directed at national guitar, Latin, and classical media. Select service to classical radio stations.