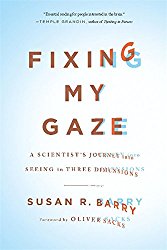 When neuroscientist Susan Barry was fifty years old, she took an unforgettable trip to Manhattan. As she emerged from the dim light of the subway into the sunshine, she saw a view of the city that she had witnessed many times in the past but now saw in an astonishingly new way. Skyscrapers on street corners appeared to loom out toward her like the bows of giant ships. Tree branches projected upward and outward, enclosing and commanding palpable volumes of space. Leaves created intricate mosaics in 3D. With each glance, she experienced the deliriously novel sense of immersion in a three dimensional world.Barry had been cross-eyed and stereoblind since early infancy. After half a century of perceiving her surroundings as flat and compressed, on that day she was seeing Manhattan in stereo depth for first time in her life. As a neuroscientist, she understood just how extraordinary this transformation was, not only for herself but for the scientific understanding of the human brain. Scientists have long believed that the brain is malleable only during a “critical period” in early childhood. According to this theory, Barry’s brain had organized itself when she was a baby to avoid double vision – and there was no way to rewire it as an adult. But Barry found an optometrist who prescribed a little-known program of vision therapy; after intensive training, Barry was ultimately able to accomplish what other scientists and even she herself had once considered impossible.A revelatory account of the brain’s capacity for change, Fixing My Gaze describes Barry’s remarkable journey and celebrates the joyous pleasure of our senses.